1) ILLUMINANCE is a photometric term that quantifies light incident on a plane or a surface and can include contributions from electric light and daylight. The Illuminating Engineering Society (IES) recommends horizontal and vertical illuminance targets to ensure adequate illumination and safety for occupants of various ages. Illuminance is expressed in lux (lumens per square meter) or footcandles (lumens per square foot). 1 footcandle = 10.76391 lux. 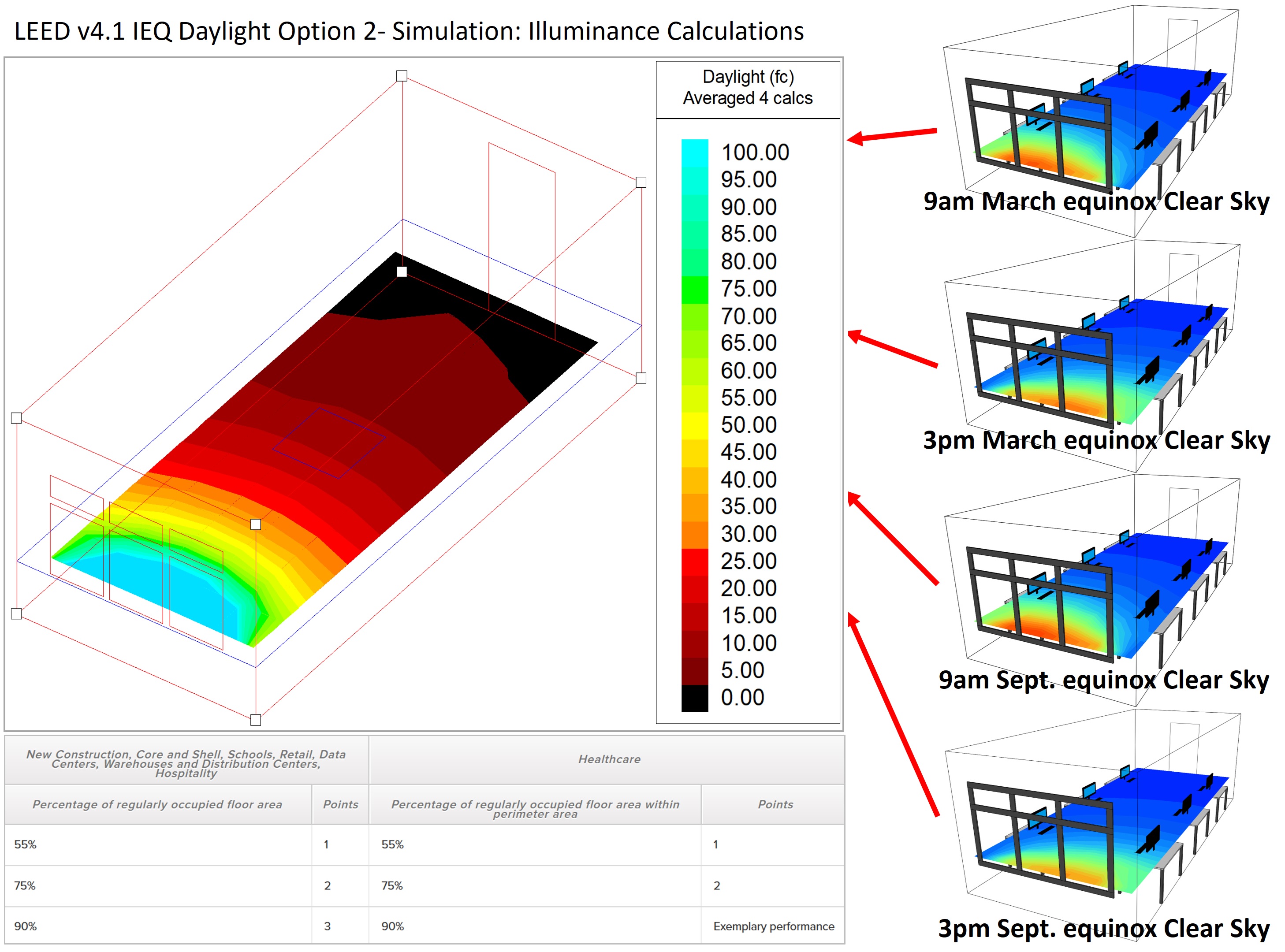 2) USEFUL DAYLIGHT ILLUMINANCE (UDI) is the annual occurrence of illuminances that is within a “useful” range for occupants. 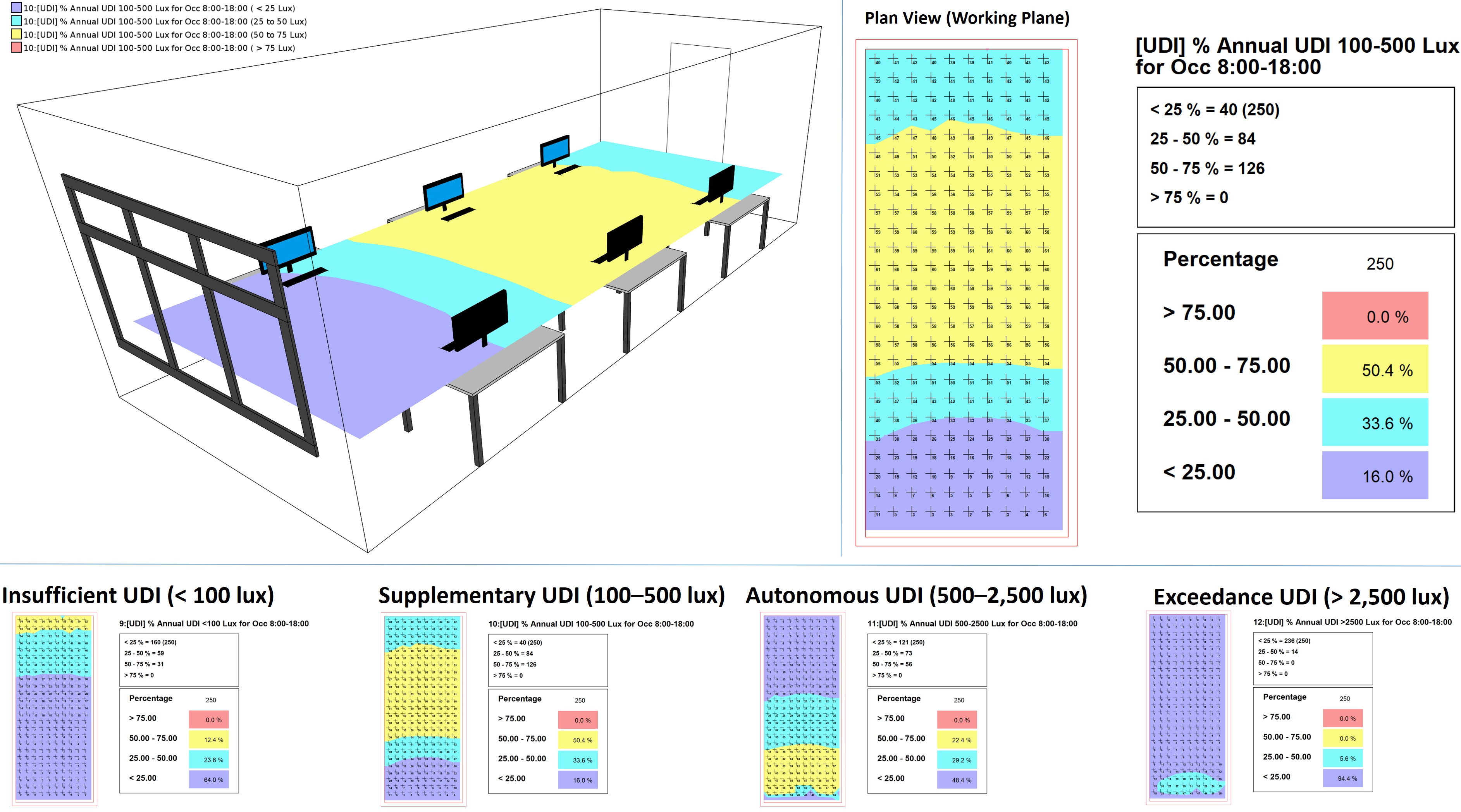 3) DAYLIGHT FACTOR (DF) is the ratio of the illuminance at a point on a plane in a room due to the light received from a sky of assumed or known luminance distribution, to that on a horizontal plane due to an unobstructed hemisphere of this sky. Direct light is excluded from both values of illuminance, so a cloudy sky is modeled (e.g. CIE Overcast Sky). DF calculations provide the same results regardless of time of day (shown below) or orientation. DF is expressed as a percentage.

4) UNIFORMITY is the ratio of minimum illuminance to average illuminance (EMIN/EAVE). For side-lit rooms, uniformity should be in the range of 0.3 – 0.4.  For top-lit spaces such as an atrium, a uniformity of 0.7 could be expected. In the example below, light-redirecting blinds are ‘throwing’ light further into the room while eliminating the excessive direct daylight under the window. A  Bidirectional Scattering Distribution Function (BSDF) is assigned to the window to represent the daylight redirecting blinds. 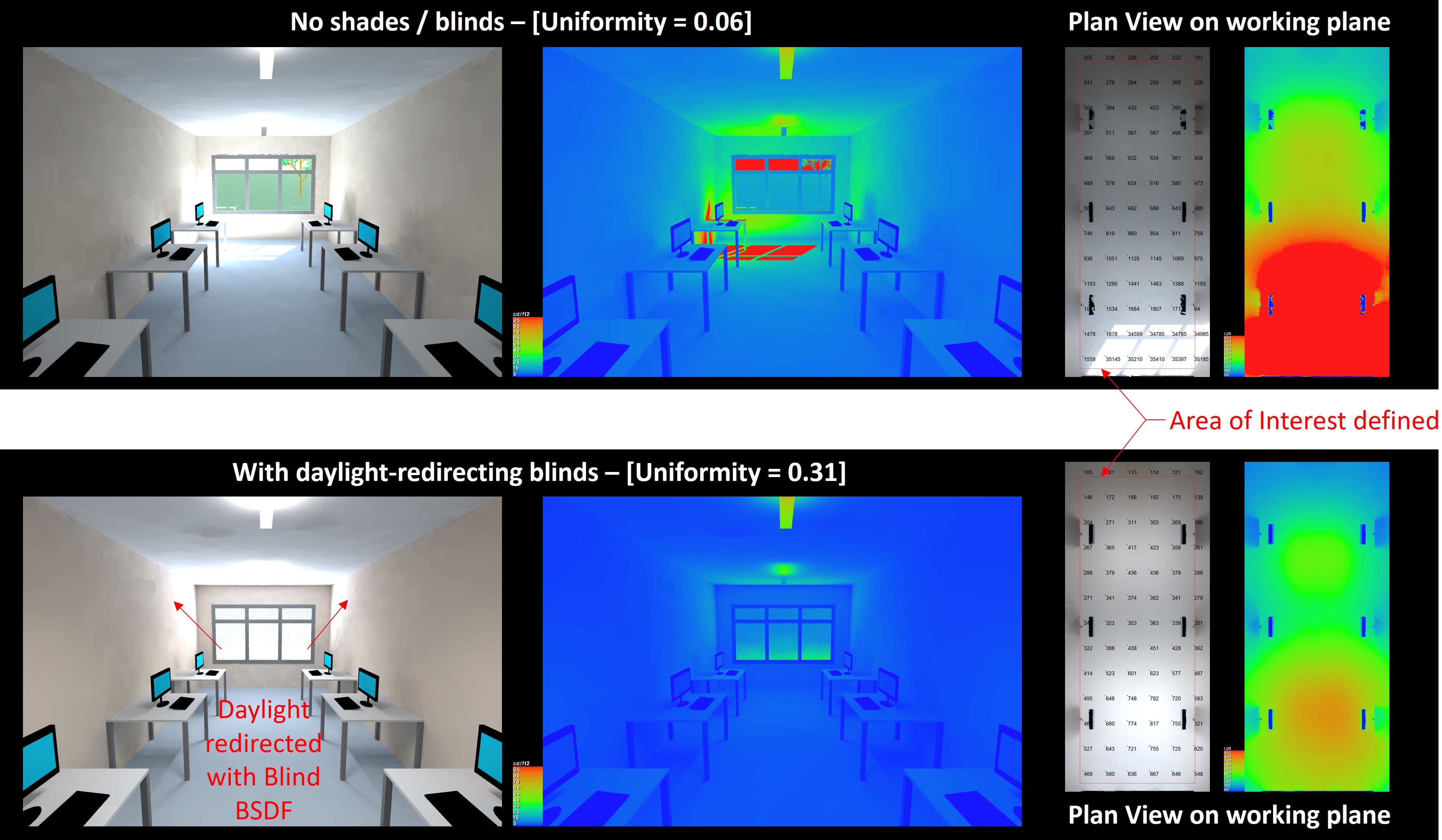 5) VERTICAL SKY COMPONENT (VSC) is a measure of the amount of sky visible from a center point of a window, though excludes direct light (i.e. uses a CIE Overcast Sky). A window that achieves 27% or more is considered to provide good levels of daylight. VSC is often viewed from the exterior of the model building and is particularly appropriate in a congested or urban environment.  Windows shown is green below pass the VSC threshold.

6) SPATIAL DAYLIGHT AUTONOMY (sDA) is the annual sufficiency of daylight levels in a space. sDA examines the percentage of an analysis area (e.g. working plane) that meets a minimum illuminance level (e.g. 300 lux) for a specified fraction of the operating hours per year (e.g. 50% of the operational hours of the year). In the example below, 20.8% of the working plane area exceeds the specified illuminance level of 300 lux for the specified amount of annual operational hours; i.e. 50% of the hours from 8am to 6pm. The sDA300lux/50% = 20.8% (7.2%+13.6%) is below a nominally acceptable threshold for sufficient daylight. 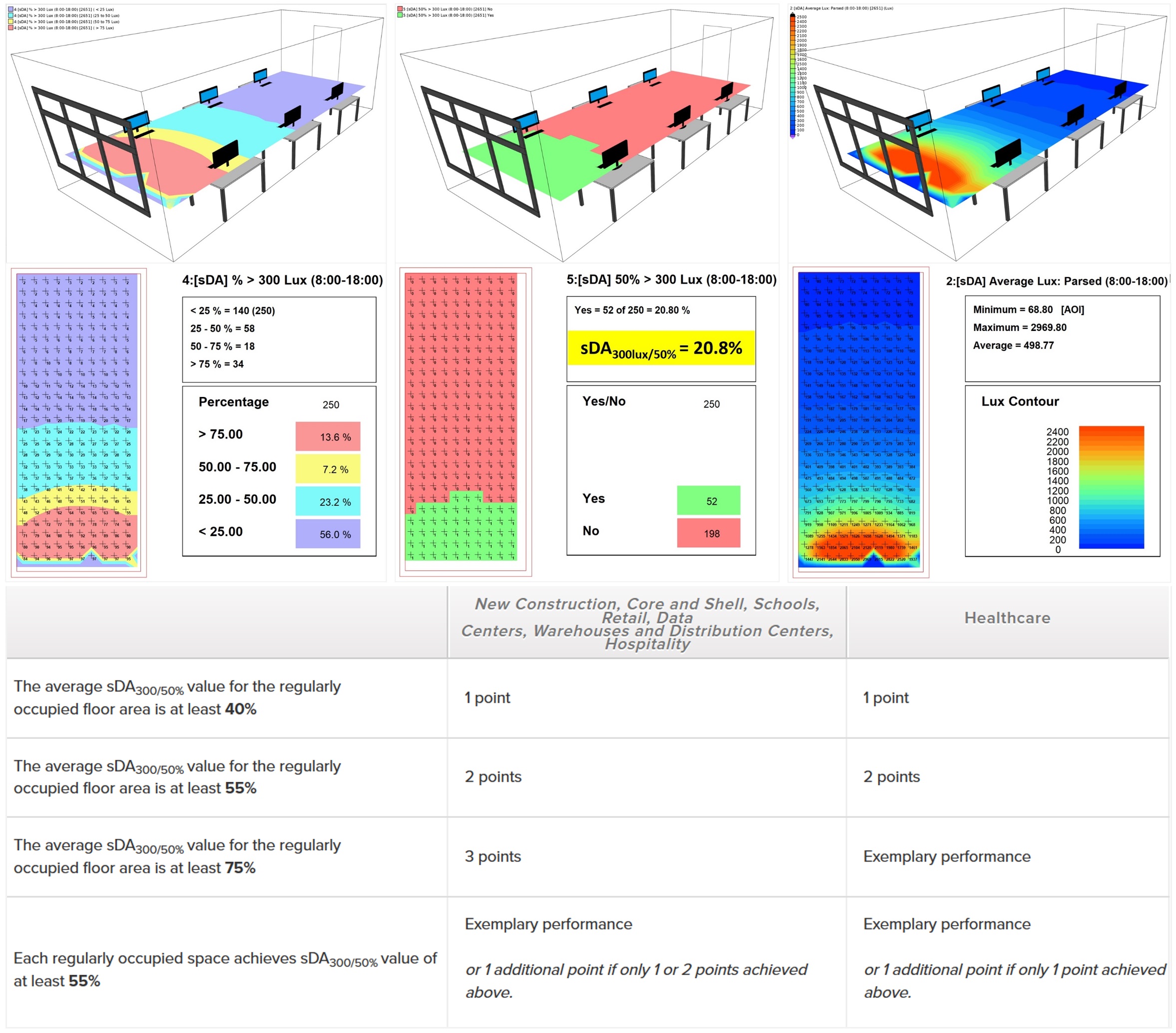 8) LUMINANCE measures light that is leaving a surface in a particular direction and considers the illuminance on the surface and the reflectance of the surface. Luminance is sometimes referred to as brightness and is measured in candelas/m2 (also known as nits) or candelas/ft2. (also known as foot-lambert). 1 cd/ft2 = 10.76391 cd/m2.

9) DAYLIGHT GLARE PROBABILITY (DGP) is a robust glare metric whereby glare sources are detected by contrast ratios with direct daylight considered, as are specular reflections. DGP is a newer Glare metric (2006) when compared against older glare metrics such as UGR, DGI, CGI & VCP.

10) ROOM CAVITY RATIO (RCR) is an important factor used in illuminance calculations and is the ratio of room dimensions used to quantify how light will interact with room surfaces. 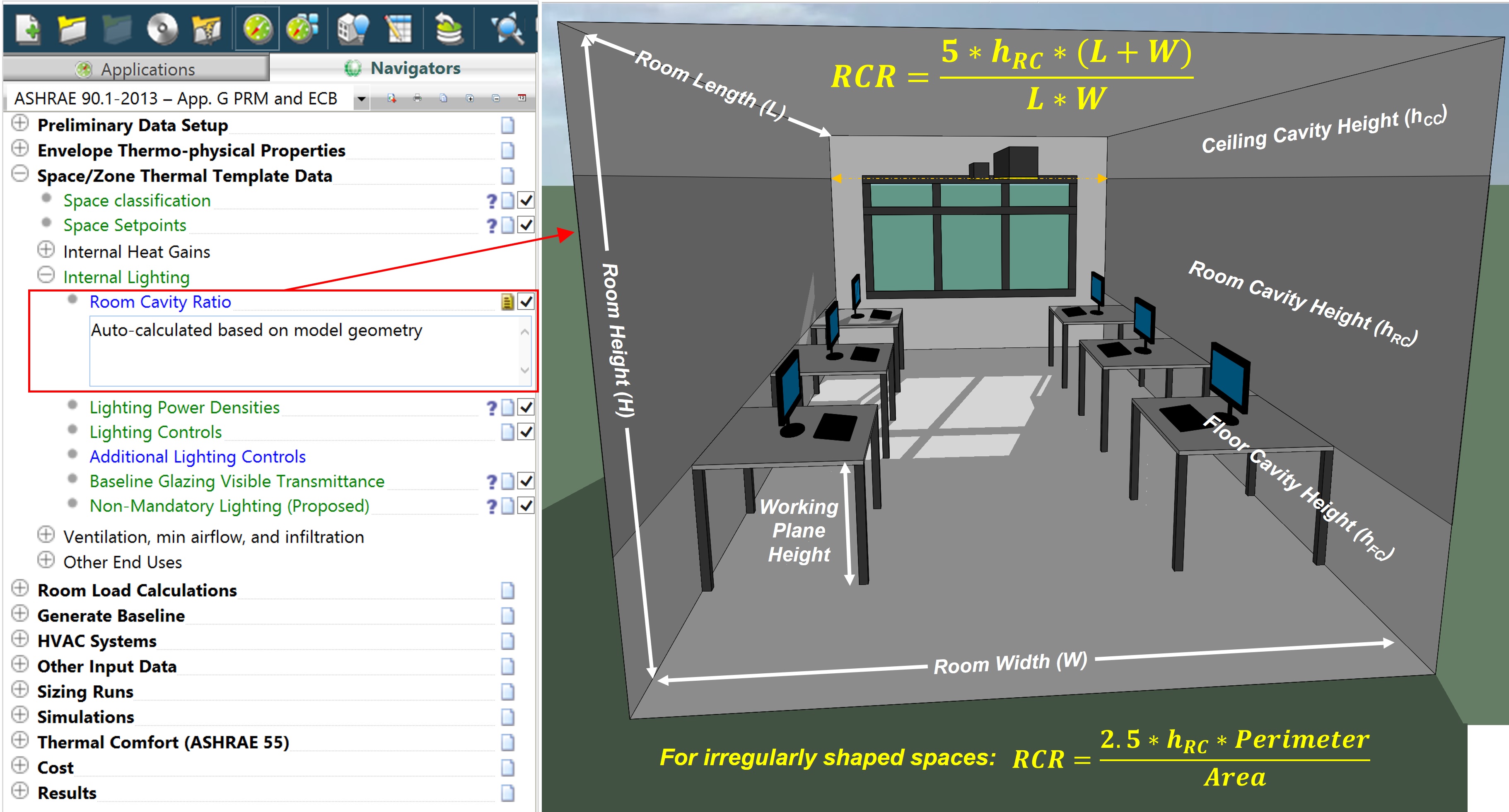 RCR for Electric Lighting: The RCR is required to compare luminaire zonal lumen distribution because any given luminaire’s lumen values only represent the raw light emitted from a product, with no indication of light distribution in the actual application; i.e. in a room.  A luminaire’s Coefficient of Utilization (CU) provides such applied performance and is based on the RCR for any given space. Seemingly identical lighting fixtures in terms of lumens outputs and watts input, can vary by ~20% in actual lumens applied in the space once the RCR is known.

RCR for Daylighting: Processing the RCR is a common requirement in various building energy codes such as ASHRAE 90.1, IECC, Title 24 in California & NECB in Canada, just to name a few.  The relationship between a calculated RCR, glazing (vertical or horizontal) area and glazing locations helps to determine the primary side-lighted, secondary side-lighted and skylit zones in a room. Each daylight zone could see a corresponding photocell controls, auto-shutoff controls &/or daylight controls. Controls are applied to all or apportioned installed lighting power in associated daylight zones.  Some energy codes will determine the Lighting Power Density (LPD) of the baseline/standard building as a function of RCR and target illuminance values.

In summary, the range of daylight-related metrics can feel overwhelming and they will likely evolve as new building regulations become more energy-conscious and more considerate to the well-being of building occupants. To establish which metrics are appropriate for your building(s), the building owner & occupant should be made aware of the impacts of occupant visual comfort and the energy/cost impacts associated to complying with a building rating systems.