1) SITE ENERGY USE INTENSITY (EUI SITE) or BUILDING EUI accounts for the net-energy consumed within the building(s) boundary. The inefficiencies associated with the creation, transportation, and distribution of electricity and fossil fuels are not accounted for. A Site EUI in Figure 1 is reported as kBtu/ft2/year or kWh/m2/year.

2) SOURCE ENERGY USE INTENSITY (EUI SOURCE) or PRIMARY ENERGY INTENSITY accounts for all of the net-energy consumption from the operation of the building(s). This metric accounts for the energy processes to create, transport & distribute the fossil fuels and electricity to the building(s). A Source EUI in Figure 1 is reported as kBtu/ft2/year or kWh/m2/year. The U.S. Department of Energy references Source Energy in the common definition for a Zero Energy Building (ZEB).

3) CARBON EMISSIONS account for the net energy consumed within the building(s) boundary and is converted to pounds (lbCO2) or kilograms of CO2 (kgCO2) emissions by applying regional carbon emission factors for each fuel type. Some member nations of the European Union require CO2 emissions to be reported for new buildings. Figure 1 shows this for annual building(s) operation. 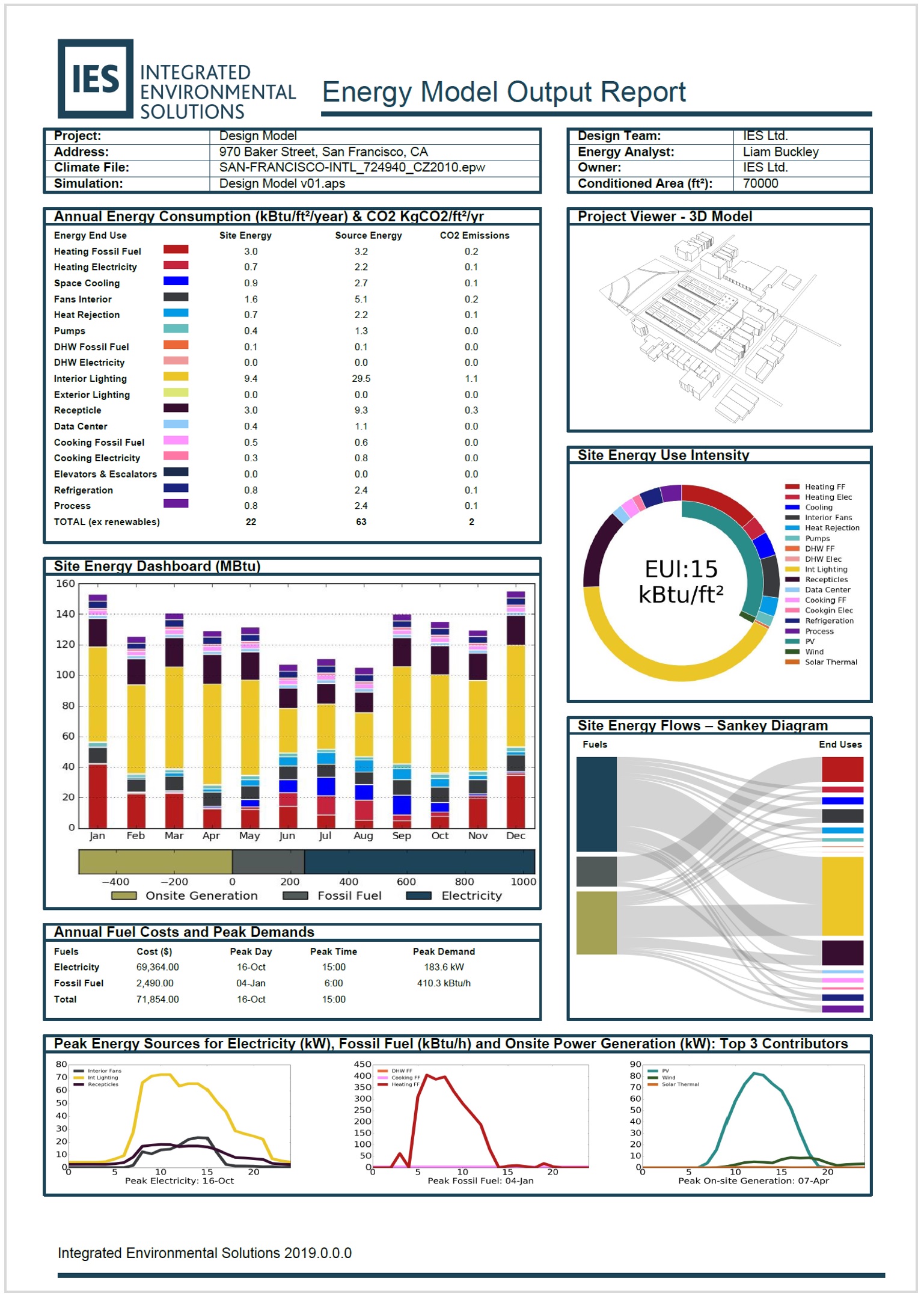 4) ENERGY COST includes the annual energy costs from all sources of fossil fuel and electricity. In Figure 1, this is shown as a $/year, €/year, £/year, etc. Occasionally an Energy Cost Index (ECI) metric may be referenced, which uses the same Energy Cost but divides by the floor area of the building(s).

5) PEAK DEMAND is a term frequently used in utility demand-side management. A review of the peak demand curves in Figure 1 help to identify load-shifting and optimization strategies that will save on energy costs for the building owner/operator and reduce demand on the utility grid. The top-3 end-use contributors or sources are shown and are identified as primary causes of those peak demands for electricity and fossil fuels.

6) PERFORMANCE COST INDEX (PCI) is a metric sighted in ASHRAE Standard 90.1-2016, which is referred to in LEED v4.1 and can also be used in other regional energy codes (E.g. IECC-2018). The PCI is calculated by dividing the Proposed Building Energy Cost by the Baseline Building Energy Cost. The PCI calculation also uses pre-determined Building Performance Factors (BPFs) which account for the varying performance of different building types in different Climate Zones.  In Figure 2, a PCI score of one is a minimally compliant building and a PCI score of zero is a Zero Net Energy (ZNE) building

7) TDV ENERGY & DEER DEMAND are metrics used in California which represents a proxy of real-time costs for natural gas, propane, and electricity. Time Dependent Valuation converts the fuel usage on an hourly basis for 86 regional locations. These metrics are used in Utility Incentive Programs in California.

8) POWER USAGE EFFECTIVENESS – Category 1 (PUE1) is a metric sighted in ASHRAE Standard 90.4-2016 and is commonly used for data-center buildings. PUE1 is the ratio of the total site energy of the building(s) to the IT equipment energy and an example is shown in Figure 3. A typical PUE is within the range of 1.5-4.0 and a lower PUE implies a more efficient design. PUE0 (Category 0) exchanges peak electric demand as the metric used, instead of energy. 9) THE 2030 CHALLENGE BENCHMARK is a common baseline goal, agreed upon by Architecture 2030, AIA, ASHRAE, IESNA and USGBC, used for comparing a proposed design EUI against the national average of existing commercial buildings in the United States, sourced from a 2003 Commercial Building Energy Consumption Survey (CBECS) & elsewhere through ENERGY STAR Target Finder.  The end-goal of the 2030 Challenge is a ZNE building (EUI SITE = Zero) after 2030. From now until 2030, a dynamic target is applied for a proposed design EUI SITE:  70% less than the 2003 CBECS baseline until 2020, 80% until 2025, and 90% until 2030. Energy model reporting is made easy with an automated connection to the AIA Design Data Exchange. 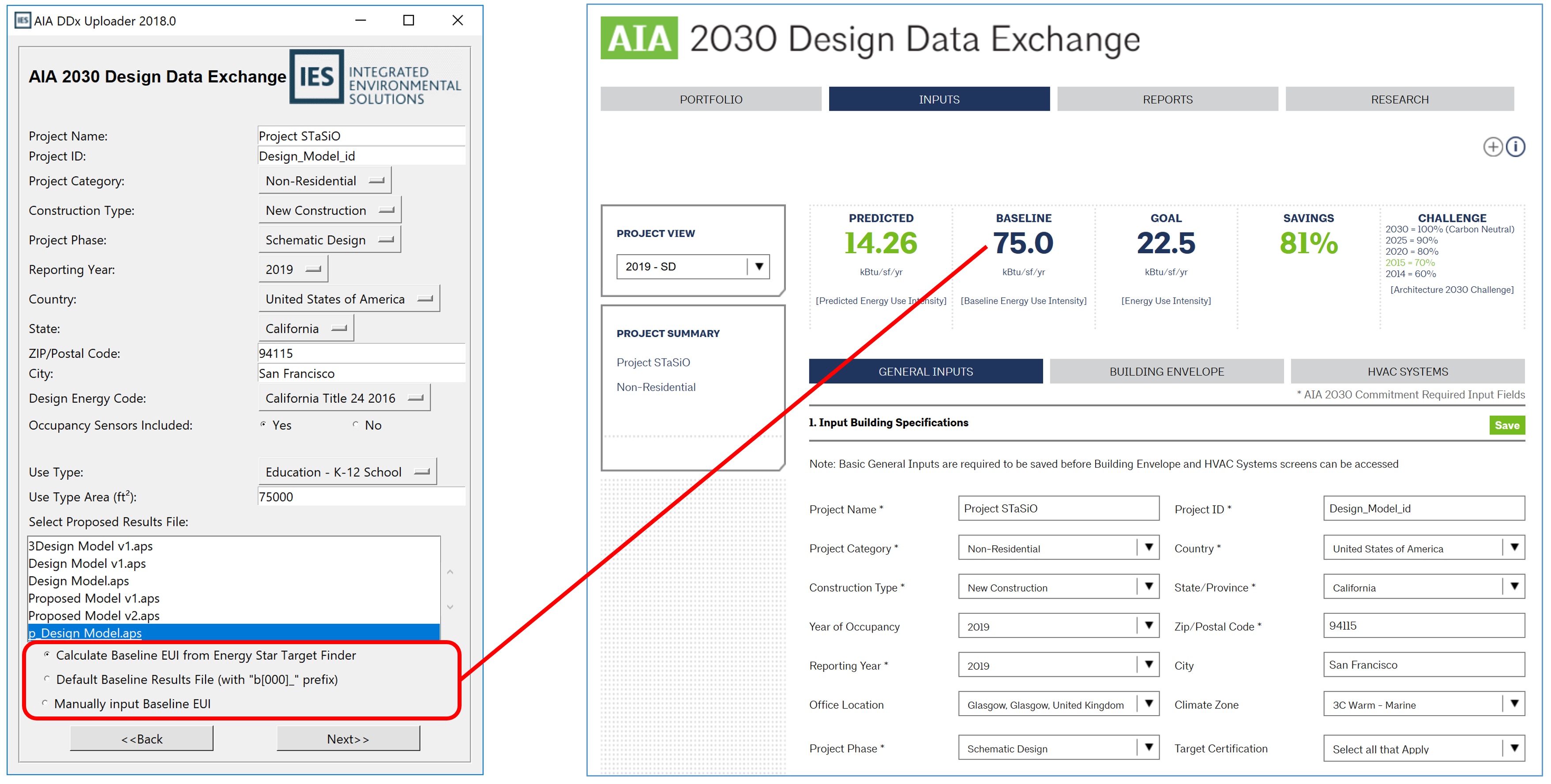 10) THERMAL ENERGY DEMAND INTENSITY (TEDI) is a metric which has seen occasional reference in some parts of Canada and accounts only for the heating energy delivered into a building, yet excludes efficiencies related to how that heat was generated.  DHW heating is excluded, as well as any energy credits for ground-source heat pumps, solar hot-water (pre)heating, and some heat recovery system E.g. a 3-pipe VRF system. Due to these non-holistic limitations, as well as omissions for efficient lighting design and mechanical cooling design and increased ventilation rates above code minimum standards, TEDI is frequently the preferred metric of building envelope consultants. TEDI is measured in kWh/m2/year of modeled floor area.

In summary, the range of energy-related metrics can be extensive and they will likely evolve as new building regulations are adopted. To establish which metrics are appropriate for your building(s), you should check the requirements of your Authority Having Jurisdiction (AJH), your City/State/Country energy code, your client’s portfolio commitment (e.g. government owned), current building energy-ratings systems (e.g. LEED), any potential utility rebates and your own company corporate AEC commitment (e.g. AIA 2030). For some buildings, 4-5 metrics might apply, but compliance with at least one metric is still a valuable energy-conscious contribution.