Design for Performance and the role of the ICL Digital Twin

To date, the UK has had a design-for-compliance culture which has led to the performance gap that exists between original design intent and how a building truly performs in-use.

While the energy efficiency of new offices in the UK has been subject to Building Regulations Part L, and represented in market transactions by Energy Performance Certificates (EPCs), both these mechanisms focus on design and technologies that only improve predicted building performance, but disregard in-use performance. Often, the result is that the only real energy and environmental consideration made during a contemporary building design project is the evaluation of whether or not a building fulfils the requirements specified in the Building Regulations.

The Better Buildings Partnership has been working with its members and the industry to address this issue, culminating in the Design for Performance (DfP) initiative. This has led to the launch today of NABERS UK - a new energy efficiency rating scheme for in-use performance that will enable commercial office developers and owners to deliver better buildings in operation. The scheme is modelled on the existing NABERS rating system which has been in place in Australia since 1999 and now covers 86% of Australia’s office market, resulting in a 36% improvement in the energy intensity of landlord services since the scheme started there.

The Design for Performance approach is one which we here at IES have advocated for some time now. Advanced simulation modelling is a key technical driver of good performance outcomes. It is critical to recognise that advanced modelling is not only in itself a more insightful tool than conventional compliance modelling, but also that the simulation modelling process must be transposed from a tick-box exercise, as is normal in the UK, to the prioritised status, where its results are instead deployed as a core consideration for the design, construction, commissioning and fine tuning of the building. Importantly, more accurate design calculations, underpinned by a credibility arising from monitoring feedback and learning from previous projects, help to reduce capital costs as the plant and systems are sized correctly for the calculated demands, without over-specified safety margins.

Due to the complexity of the built environment and prevalence of large numbers of independent interacting variables, it is often difficult to achieve an accurate representation of real-world building operation. However, by reconciling model outputs with measured data, we can achieve more accurate and reliable results.

IES has been innovating over the years within the area of simulation and performance modelling across the various stages of a building’s lifecycle and how to make it accessible to the inherently different build, design and operational teams. Building Performance needs to be at the core of a Digital Design and Operation approach which is why the IES Intelligent Communities Lifecycle (ICL) provides a single platform that can model, predict and verify performance continuously throughout a building’s life cycle.

Our ICL Digital twin technologies have been used in many projects throughout the globe to bridge the performance gap between design and real-life operation. Using our unique integration of digitised physics, AI and machine learning, a digital twin can be created for any design proposal to model the energy performance for various options and weigh up the risks and potential savings in order to establish the best design option to reach net-zero targets. These live digital twins in the operational phase respond and behave like their real-world counterparts and connect the buildings with energy and transport systems to support decision making and ultimately reduce risk.

In order to integrate simulation into the overall design process, it necessary to develop procedures that allow designers to utilise building simulation at different building design stages and this is something we have done.

The RIBA plan of work and how our advanced performance simulation and Digital Twin sit in each stage: 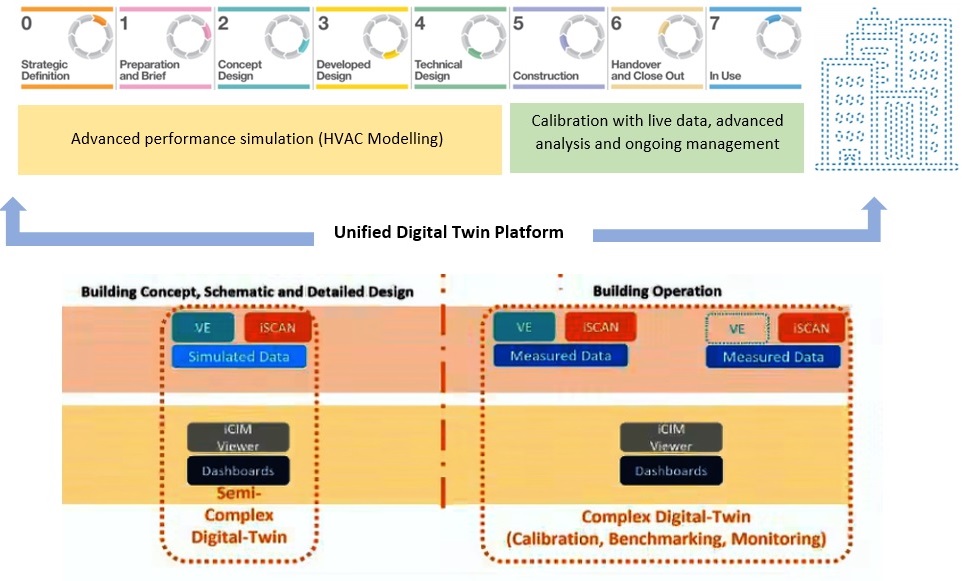 The Digital Twin is created by extracting BIM information to the IES sustainability analysis and simulation model, which is used to develop the highest possible sustainability performance. This model is then calibrated with live data to perform an advanced level of analysis and ongoing management to achieve advanced sustainability performance that is unobtainable by conventional means through the application of Physics Intelligence. Performance improvements are simulated to a very high level of accuracy prior to implementation and continuously monitored after implementation. The software integrates with and complements other building systems such as BMS and causes no disruption to occupied buildings to provide a high return on investment.

Design for Performance offers huge prizes, not just in energy efficiency but its association with good design and management, occupant satisfaction, higher rents and capital values, not to mention the environmental benefits. A typical return on investment for a Digital Twin applied to a large commercial development is in the region of 100% within 1 year.

Our IESVE advanced modelling software has already been used on most NABERS accredited projects in Australia and, with a large number of UK new builds having also been modelled using our tools for building performance, we are uniquely positioned to support the new scheme. In fact, our IESVE software has already been used during the design stage modelling for a new 139,000 sq ft development which is set to be the UK’s first net zero carbon commercial building and also the first to pursue certification under the NABERS UK scheme.

What’s more, now with our cost effective and user friendly ICL digital twin tools, we can help users bridge the gap between procurement and operations and facilitate ease of data exchange between teams, providing maximum accuracy in results to help the industry to develop solutions with confidence that they will work in practice.

We welcome the launch of the new NABERS UK scheme as a firm starting point from which to rate buildings according to their operational performance, providing a much needed catalyst to broaden the conversation with clients around the need to look at operational performance holistically. Ultimately we hope to see the Design for Performance initiative branch out beyond the scope of the current scheme to encompass all buildings and assets – new or existing – where Digital Twin technologies, such as ours, are already uniquely placed to measure and communicate performance in its widest sense to the entire stakeholder network.

To find out more about how IES and our technology can support a Design for Performance approach, get in touch with our team today.