The Dinton Activity Centre (DAC) is a new Activity Centre being built at the Dinton Pastures site by Wokingham Borough Council (WBC). The building is predicted to be a Net Zero Carbon Operational (NZC (Op)). In this guest blog, IESVE user Vince Ruane, the Founder and Director of RCDC, takes us through the steps taken to achieve this design performance, and the challenges faced by the team.

The Requirement and Brief

DAC is a new activity centre designed to replace the existing aging building that is currently on the site. The building has many roles, acting as an activity centre, water sports centre and also as a teaching and meeting space (to increase usage during the winter months). WBC, who commissioned the building, employed HLM Architects to undertake the design, and off-site construction specialist Reds10 for the construction.

In July 2019, WBC declared a Climate Emergency, and later went on to release their Climate Emergency Action Plan (CEAP), which coincided with the early design stages of the project in early 2020. The CEAP initially stated the aim of WBC being NZC as an organisation by 2030 (this has now been revised to be 2028 as an organisation and 2030 as a borough). This posed a challenge to the council’s development team and the designers for the project, due to the significant change in the brief and design that this introduced. It was at this point that WBC engaged RCDC to provide a review of the building’s predicted energy performance and develop recommendations that could help to achieve the targeted (NZC Op) performance.

RCDC had previously been employed by the council to write its Built Environment CEAP Design Guide which set out guidelines for WBC Project managers (PMs) and project teams on how to approach sustainability. The guide had a number of objectives which were focussed on targeting true NZC (Op) performance. The guide simply defined NZC (Op) as a balance between energy usage and energy generation. DAC was within the first batch of projects to which these guidelines were applied.

The biggest challenge associated with this was simply providing enough generation to achieve the Operational NZC balance. For any building, this is a significant challenge, and if any key message is taken away from this exercise, we would suggest that it is:

The figure of 120kWhr/m2 is achievable and the target of 60kWhr/m2 can be reached for certain low energy building typologies (residential, schools, libraries, etc.) but will be difficult to achieve for higher intensity building typologies (office, leisure centres, hotels).
This very fundamental fact should be informing the briefing process for any building which is looking to achieve NZC (Op). This is not to say that all buildings should be limited to two stories. Three or four storey buildings can achieve better form factors and better land use. This could also lead to building less, meaning less embodied carbon. Therefore, as with most design decisions, this will become a compromise, with some combinations of sites and briefs being well suited to NZC (Op) performance, and others not so.

A further key challenge was around the lack of recent data for specific energy usage, particularly those driven by occupant behaviour. Some examples include the kitchen energy usage, the DHW energy usage and other similar small power usage in offices. Large centralised databases of usage specific data would allow much more accurate prediction of energy usage.

In order to achieve the required energy balance, the RCDC team first had to predict the energy that the building would use. The CEAP design guide states that the CIBSE TM54 methodology should be employed in order to achieve this. This decision had been taken due to the performance gap that exists when Part L / BRUKL / EPC calculations are utilised to predict energy usage. These tools were designed as building performance comparison tools used to ensure a minimum level of energy efficiency, and not designed to provide accurate predictions of energy usage. 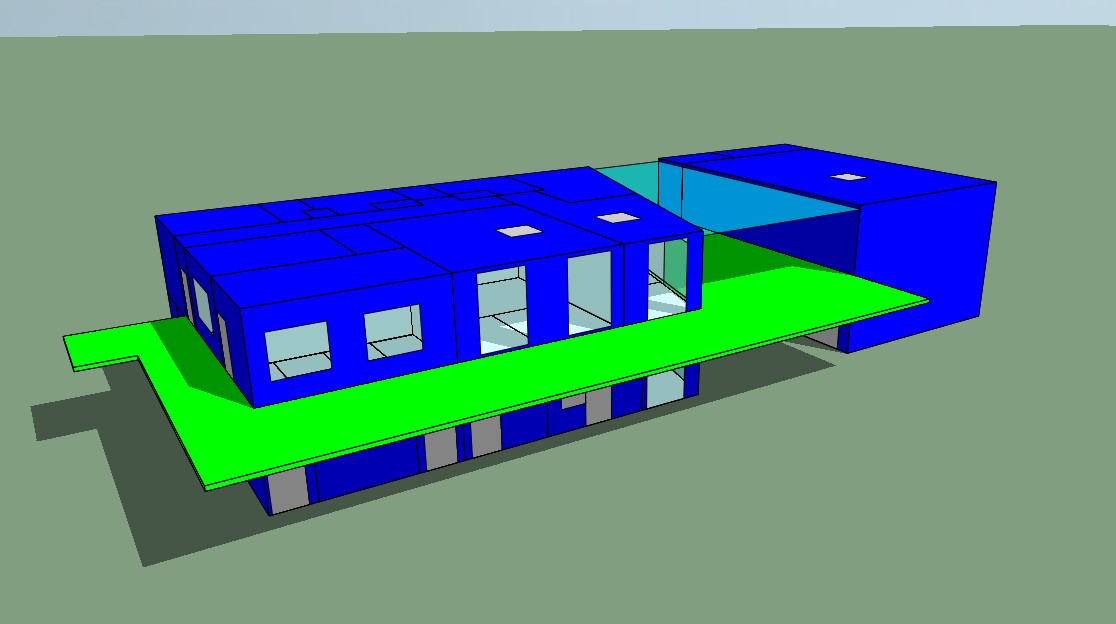 Completing this TM54 calculation was therefore the first step undertaken by RCDC as part of the NZC review exercise.

RCDC have developed their own inhouse Predictive Energy Calculator based around the TM54 methodology. The tool is designed to speed up the time consuming nature of TM54 calculations, and it also allows for the review of a number of design interventions which can reduce energy usage. All of this can be undertaken in a rapid and consistent manner.

A key input into this calculator is an understanding of the fabric energy performance. IES ApacheSim is utilised to calculate the fabric performance throughout the year. A model of DAC was created in IES (model can be seen above) with the buildings geometric and physical constraints applied. The Predicted Energy calculator then evaluated the heating, cooling, ventilation, small power and all other building energy usages, with the initial results seen in the below graph. 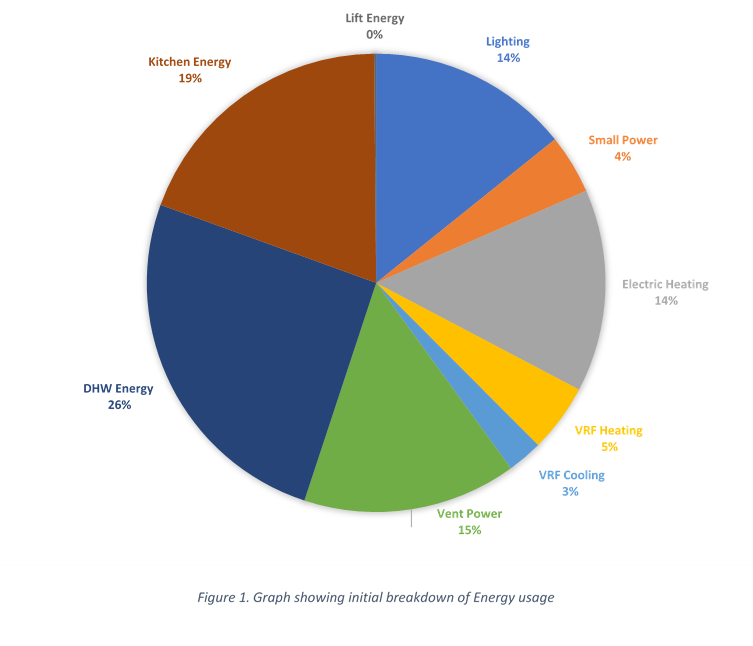 It can be seen that Domestic Hot Water (DHW) is the largest energy user with around a quarter of the energy use, with the kitchen being the 2nd largest. Both of these figures are based on predictions of user behaviour, namely number of showers that are had and number of meals that are made. The latter of these is then multiplied by an energy per meal figure given within CIBSE TM50, a document which was written in 2009, and therefore likely to be slightly out of date. These two elements combined give a large uncertainty margin which was picked up in the sensitivity analysis performed.

Separately, a benchmarking exercise was also undertaken to provide an idea of how well the building’s predicted energy performance compared to other similar buildings. CIBSE’s online Beta Benchmarking tool was utilised to provide the comparable data. The results can be seen within the graph below. 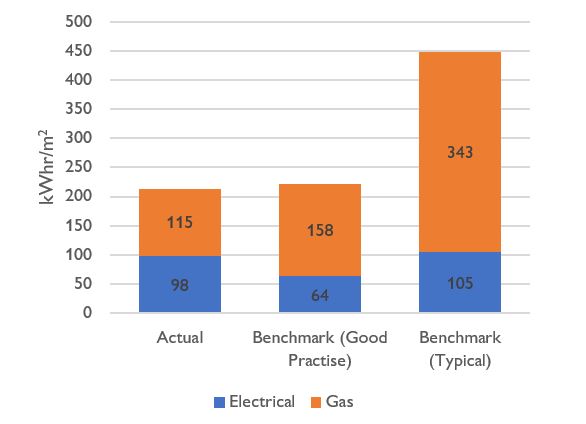 The initially modelled results showed that the building would be using around 213W/m2. This was a slight improvement on the good practise benchmark, although it should be noted that the DAC likely has a higher DHW and kitchen load than the typical leisure centres reflected in the benchmarks.

The predicted carbon emissions for this baseline design were 30.3tCO2e annually.

RCDC then worked alongside HLM Architects, Reds10 and the wider delivery team including Delap and Waller, the M&E designer for the project, to develop and review potential design interventions. For each of the design interventions, the capital and operational cost were reviewed alongside the operational carbon impact of the change, with a Cost to Carbon Reduction (CCR) ratio being reviewed. This CCR ratio had been developed by WBC and RCDC to review the cost effectiveness of any sustainability measures.

Whilst the initial design was already highly sustainable, some improvements were able to be found:

The energy balance was achieved through the addition of 350-400m2 of Photo Voltaic (PV) installed as carports within the car park, in additional to the 75m2 already proposed for the roof of the building (this area was also increased, and PV is currently planned to be provided on some permanent storage containers with the final details currently being developed). The remaining PV is being added as an additional change, requiring its own planning application, thus there is still some design development required on exactly how the additional PV will be provided.

From a cost effectiveness perspective, the carport PV’s don’t perform as well as PV’s on the roof of the building, however they were required to provide the targeted energy balance. The carport PVs were still predicted to provide lifecycle payback when considering longer lifecycle periods and the continued rise in the cost of grid electricity.

The building is due for completion and handover in summer 2021. Once operational, the energy usage data of the building will be reviewed and the NZC (Op) can be verified. Follow up reports detailing this verification of performance are planned to be publicly released alongside lessons learned around the design of the building. These are likely to be issued in the summer of 2022 following a full year’s occupation of the building.

B1M Video: IES Technology is Transforming How Buildings Use Energy