What you need to know about NABERS UK

August 12th at 12:00am
Staff Contributor

Following the 2020 launch of NABERS UK, our IES consulting team explain the key points to know about the new scheme and what is entailed in pursuing certification.

If you’re not already familiar with the scheme, NABERS UK is a performance-based rating system that now operates across England, Wales, Scotland and Northern Ireland. Managed by the Building Research Establishment (BRE), the scheme is owned and licensed by NABERS, who also own and administer the well-established Australian NABERS rating scheme, which has been successfully pioneering a Design for Performance approach down under for over two decades.

The launch of NABERS UK in November 2020 marked an important turning point for the UK buildings industry where, historically, a “design for compliance” approach has largely been the norm. This has resulted in a fractured system which has led to the well documented “performance gap” between the design intent and real-world operational performance of our buildings. While, currently, the NABERS UK scheme only measures and rates the “base building” energy efficiency of office buildings (the Australian scheme also includes tenancy and whole building options), it is nevertheless a step in the right direction for UK building performance.

In a step change from the UK’s traditional design-based ratings (in the form of EPCs), NABERS Energy ratings measure and verify the recorded energy use of existing offices, helping building owners to accurately track and communicate the energy performance of their buildings.

Meanwhile, Design for Performance (DfP) provides a framework for developers to help ensure their projects deliver against their design expectations, helping to embed energy performance targets within the delivery supply chain and providing checks and assurance measures to help achieve the targeted performance rating in operation.

The objective of using DfP at the design stage is to more accurately estimate the energy consumption by simulating the refurbished office space as it is expected to operate, using best practice inputs and principles.

NABERS UK ratings are expressed as a number of stars based on the measured performance of the building once in operation, on a scale of 0 (being the worst performers) to 6 stars. This allows targets to be set from design concept stage through to assisting building owners to provide accurate measurements of their buildings energy performance.

The base building is the responsibility of the building owner/landlord and covers whole building HVAC and all energy used in the common parts including lights, small power, lifts, external lighting, dedicated car parks, standby generator, etc. The tenants are responsible for their own energy use in terms of lighting and power inside their premises and are therefore not currently included within the scope of NABERS UK assessments. 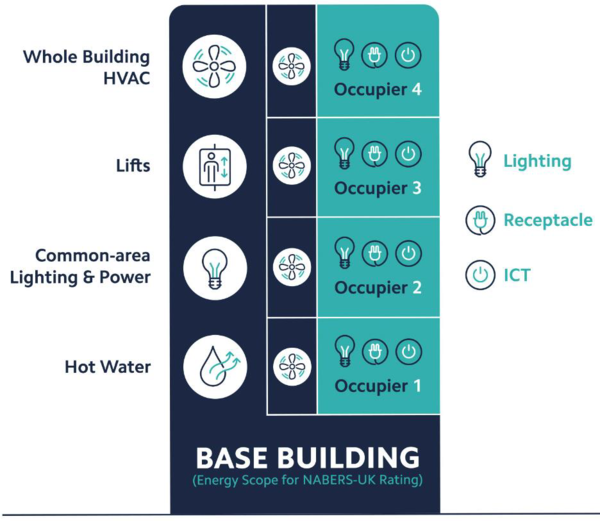 When conducting a design stage NABERS UK assessment, it is necessary to consider a number of ‘Off-Axis’ scenario studies. Buildings, as we know, are not static entities and therefore the scheme guidance affirms that to consider the ‘Base Case’ study model in isolation would be insufficient to illustrate a building’s resilience to real-world performance risks. Therefore, a range of scenarios must be presented to demonstrate that there is a significant level of uncertainty in the results of the base building calculations and to explore potential variances.

Examples of Off-Axis scenarios to be incorporated into the modelled design for NABERS UK assessment may include (but are not limited to):

In order to achieve this, it is crucial that Building Owners engage with an experienced building energy modeller with a sound knowledge of using the appropriate performance modelling tools. This is essential in being able to accurately model your building, whole building HVAC systems and other base building loads, as well as being able to reliably predict the impact of potential off-axis variances upon the overall building performance.

IES have been developing technology aimed at producing such detailed models for over 25 years and our expert Consultants are well versed in the complexities of such modelling at design stage. More recently, the introduction of our iSCAN platform (a single platform designed to centralise, analyse and provide insights on all of your operational building data, which can be fed back into your design model) means that we can offer a complete solution to help close the loop between design and operation. Helping you to progress seamlessly through the RIBA Stages, which are closely aligned to the NABERS UK scheme.

IES has long supported a modelling beyond compliance approach and our consulting team collectively draw from hundreds of man years of international experience in this area to help achieve the optimum performance outcomes for our clients. It’s therefore no surprise that we were appointed to provide our simulation services on the first ever NABERS UK project, having already worked on a number of successful projects under the well-established NABERS scheme in Australia and New Zealand. We look forward to working with many more Project Teams to succeed in delivering better building performance outcomes under the UK scheme.

For further information, or for assistance with a project, please contact consulting@iesve.com.

The final warning: the role of the built environment in turning the tide on emissions