The McDonalds’s restaurant in Orlando, Florida combines modern architecture with technology to create enough renewable energy on-site to cover its energy needs on a net annual basis. Its aim is ultimate efficiency in energy usage and performance.

To help the popular restaurant group achieve this, WSP used IESVE to conduct detailed and extensive energy analysis to help inform the design and ensure it was on track for net-zero targets. This was particularly challenging due to the high Energy Use Intensity (EUI) level that you would expect from this building type. Most projects pursuing net-zero have lower EUI and for the most part improving the efficiency of the building envelope is enough to reach net-zero. However, for this project the team had to think outside the box and go above and beyond usual strategies.

IESVE was instrumental to this as it allowed WSP to model complicated scenarios and carry out really extensive analysis, including natural ventilation, detailed modelling of the kitchen equipment, including the different controls, and setting up the advanced VRF system that serves the space.

The IESVE facilitated an integrative design process where the WSP team worked closely with the Architect and were able to quickly edit the model geometry in line with changes to the design and get results to make informed decisions throughout. Getting accurate results was particularly important to this project as they had to size the PV panels based on the results from the energy analysis, and they found IESVE very reliable for this.

Another challenge for the team, was investigating Passive strategies. Orlando has a very hot climate, so the team had to explore possibilities to reduce solar gains in the project. IESVE was used to analyse shading strategies, different geometries and different facades to measure and control solar gains.

Other passive strategies such as natural ventilation was tested in MacroFlo. The WSP team found it useful to have a simple version of CFD to measure how natural ventilation and different openings were helping and how to reduce cooling consumption in the building. The hot climate meant that cooling was definitely one of the big end uses for the project. From the beginning the Architect wanted to use natural ventilation where possible, so WSP ran analysis to see how many openings were needed and where, which was all made possible using MacroFlo.

It was decided to use a Hybrid HVAC system which is a combination of VRF and natural ventilation. The team were impressed with the ability to model this complex system in IESVE, noting that no other tool could detail a system like this and switch between natural ventilation and mechanical air conditioning.

For calculating the kitchen equipment, WSP sub-metered another McDonald’s restaurant project to figure out the schedule of each piece of equipment and they then created a schedule for them in the IESVE. This was useful as they discovered that grills and fryers were not running all day even though it is a 24/7 restaurant. Using actual real-time data and translating it to include better scheduling in IESVE for each piece of equipment enabled the team to lower the energy result at the end of the project and also understand better which equipment is using the most energy.

With the high volume of meals being served, even the heat gain from the food has an impact on the space. WSP included the food as a load in the VE so they were capturing that for the cooling consumption in addition to the usual occupancy and other sensible latent loads for the space. Fans were also incorporated to accelerate natural ventilation.

The final result was one of the first net-zero projects that has had this level of energy intensity. The 8,024 square-foot restaurant features an expansive, v-shaped solar-paneled roof and photovoltaic glass panels integrated throughout the building. Green, plant-covered walls absorb CO2, promoting biodiversity and retaining water. Louvers open and close automatically ‘inhaling” cool air in and “exhaling” warm air out. Solar parking lot lights help offset more than 9,000 kWh per year.

To solidify the restaurant’s Net Zero Energy status, the project is pursuing the International Living Future Institute’s Zero Energy Certification. Data and learnings from the restaurant will also inform McDonald’s global sustainability efforts, including progressing toward the company’s science-based target to reduce greenhouse gas emissions by 36% in restaurants and offices by 2030 compared to a 2015 base year.

This global flagship restaurant will now serve as a learning hub for McDonald’s to test solutions for reducing energy and water use, a testament to the company’s ongoing commitment to sustainable innovation.

“This was a very exciting project with aggressive net-zero targets and a real passion to meet these goals. The design process was truly integrative and holistic and required a software that enabled this. We believe IESVE is the only software available to truly enable this. For this project, the analysis was so in-depth and extensive that we used all the energy applications – ApacheSim, ApacheHVAC, MacroFlo, and Suncast. A great benefit was the ability to model the openings and how they open up in great detail in IESVE. Being able to set up the actual control profiles and tie that to the actual sequence of operation for the project is crucial when it comes to natural ventilation, as most of the time software will use default controls that wouldn’t be used in reality. In IES we were able to match that precisely to the sequence of operation in reality or an accurate measurement.” 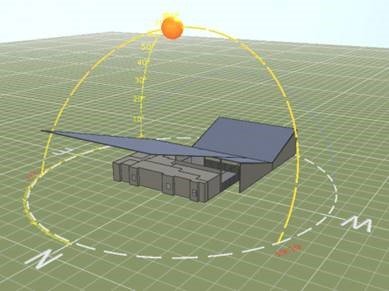